The first step for the organization of the Tunisian Contest of Typical Food Products consisted in the elaboration of a mapping of Tunisian local food products. With the support of PAMPAT 1, more than 200 representatives of the public and private sectors from 24 governorates contributed to the preparation of this analysis. 220 products were finally selected and included in the mapping, which was presented at the end of 2016. The list has now become a reference document for the Ministry of Agriculture. 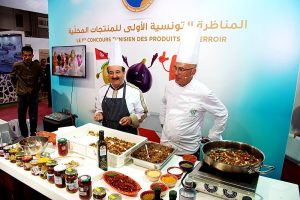 During the Contest, hundreds of tasters evaluated more than 200 typically Tunisian products and awarded more than 70 medals.
The encouraging results obtained during the first contest were largely exceeded during the second edition in 2019.

The number of participants and medals almost tripled.
645 products such as couscous, bsissa, meloukhia, prickly pear syrup, harissa, floral waters, honey and olive oil were competing and were tasted by 237 tasters.

In total, 196 medals, including 66 gold, 59 silver and 71 bronze medals, were awarded to 115 producers.
The contest has an undeniable impact on the dynamism of the regional food products sector.

The medal-winning products have been able to record an increase in sales of 30 to 50%. The great success of the Tunisian Contest of Typical Food Products was possible thanks to a large media campaign, which gave the event a nationwide visibility. Furthermore, a national public-private promotion program for the medal-winning products was set up in 2018 with the support of the PAMPAT project.

In this framework, two retail chains have become partners and sponsors of the Contest and do promote the medal-winning products on their shop shelves. 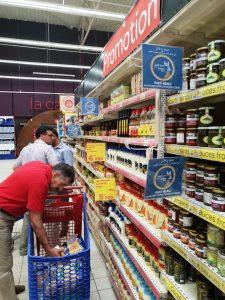 The National Radio channel has dedicated a weekly program to the flagship products of the contest, while higher education institutions teaching tourism, design and food engineering have organized national events and training activities to add value to the medal-winning products.

A collaboration with the National Chamber of Women Entrepreneurs has been established to showcase the contest’s products to the Diplomatic Corps accredited in Tunisia during targeted events.

Thanks to the commitment of several institutions such as APIA, GIFRUITS , CEPEX, the Ministry of Women Affairs, INNORPI, several Tunisian Embassies abroad or different chef cook associations, the medal-winning products have also participated at several food fairs and culinary events in Tunisia, France, Switzerland and Morocco.

The methodology of the Tunisian Contest draws its inspiration from the Swiss Local Food Competition. This event served also as a model for the set-up of the Moroccan Contest, which was supported by UNIDO and the Interjurassic Rural Foundation (FRI).

Today, the Tunisian Contest is part of the International Contests Network and has in turn become a model to be followed. Representatives from six countries participated in the 2nd edition of the contest to draw inspiration from the Tunisian experience.

Egypt and Georgia will set up their own contests with the support of PAMPAT 2.

As announced by APIA, the third edition of the Tunisian Contest of Typical Food Products will be held in 2021.

More documents and videos related to this section are available here.

Project for Market Access of Typical Agrofood Products (PAMPAT Tunisia) funded by the State Secretariat for Economic Affairs of the Swiss Confederation (SECO) and implemented by the United Nations Industrial Development Organization (UNIDO) in close cooperation with the Ministry of Economy, Finances and Investment Support, the Ministry of Industry, Energy and Mining and the Ministry of Agriculture, Hydraulic Ressources and Fisheries.